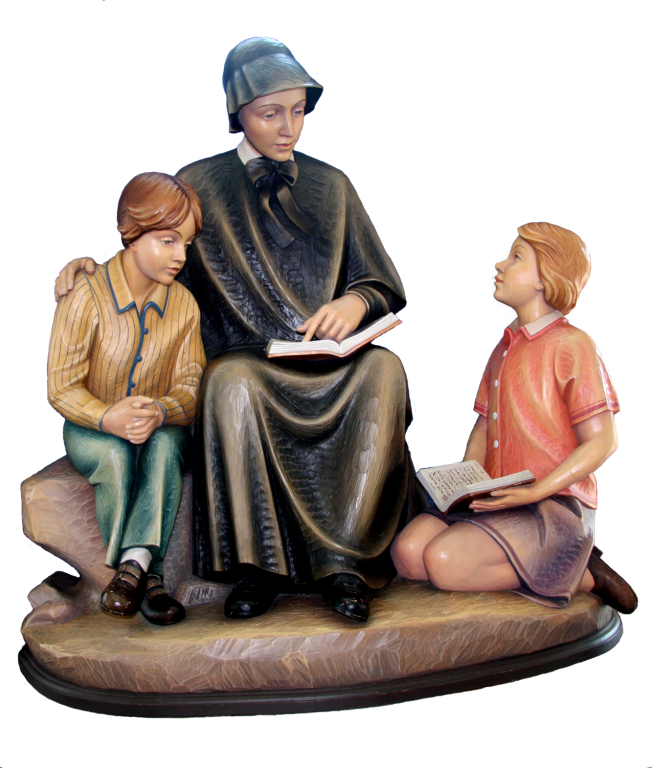 Elizabeth Bayley Seton, our patron saint, was the first native born American to be canonized by the Catholic Church.

Born on August 28, 1774, two years before the American Revolution, Elizabeth grew up in the "cream" of New York Society as a faithful member of the Episcopal Church. She was a prolific reader, and read everything from the Bible to contemporary novels. In spite of her high society background, Elizabeth's early life was quiet, simple, and often lonely. As she grew a little older, the Bible was to become her continual instruction, support and comfort. She would continue to love the scriptures for the rest of her life.

In 1794, Elizabeth married the wealthy young William Seton and together they had five children. About ten years into the marriage, the couple made a trip to Italy as part of William's recovery from a short illness. Soon after, he had a relapse and died of tuberculosis.

While in Italy, Elizabeth became acquainted with Catholicism through her Italian friends. Traveling home to New York she found herself out of place because of her growing interest in this new faith. Elizabeth joined the Church in 1805 and totally alienated many of her strict Episcopalian family in the process.

To support her family and insure the proper education of her children, she opened a school in Boston and ran it along the lines of a religious community. At the invitation of the Archbishop of Baltimore, Elizabeth established a Catholic girl's school in 1808 in downtown Baltimore. This school was the beginning of the parochial school system in America. In 1809, her tiny school has outgrown their facilities and she moved it to Emmitsburg, Maryland. Here she founded a religious community of teaching sisters known as the Sisters of Charity.

On March 25,1809, Elizabeth Ann Seton pronounced her vows of poverty, chastity and obedience, binding for one year. From this time on, she was called Mother Seton. Elizabeth lived to see her small community of sisters grow to establish chapters in New York, Cincinnati, and St. Louis. She died on January 4, 1821, sixteen years after becoming a Catholic. She was canonized on September 14, 1975, by Pope Paul IV.